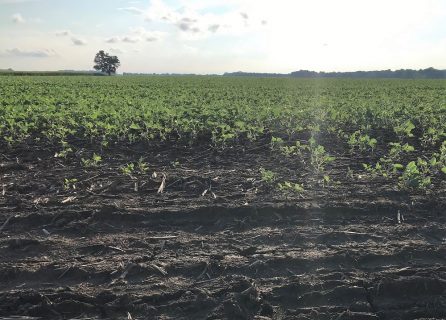 The corn and soybean markets didn’t have much of a reaction to last week’s USDA reports. In that report, it was estimated that corn stocks could reach their highest level in more than 30 years if yield forecasts for this year hold true.

During Friday’s trade, the corn market did close slightly higher. Brian Basting of Advance Trading, Inc., said corn is coming off it’s highs from last year and for the most part it’s headed south.

“We’ve had a little bit of a rebound here, but for the most part, it’s been a bearish environment,” he said. “There may be a tiny bit of a weather premium being built back into the market.”

Headed into this week, Basting said mid-June is typically a critical weather period. The extended forecast for Michigan and other parts of the country shows minimal chances for moisture. Basting said for some producers in the Midwest who have experienced a wetter season, the pattern will be beneficial for the crop to tap into nutrients and grow.

“What we’ll be watching for is a pattern that locks in and doesn’t move—that’s exactly what happened in 2012,” he said. “From the weekend of June 20 going forward, the markets can be looking for something that becomes an extended period of either warm and/or dry conditions starts to become more concerning.”

Basting added that a good spell of sunny days will be welcome, and there could be more end users purchasing product.

Basting discusses the beginning of wheat harvest in the country, soybean numbers from USDA’s WASDE report, and Brazilian harvest in full conversation in the player above.