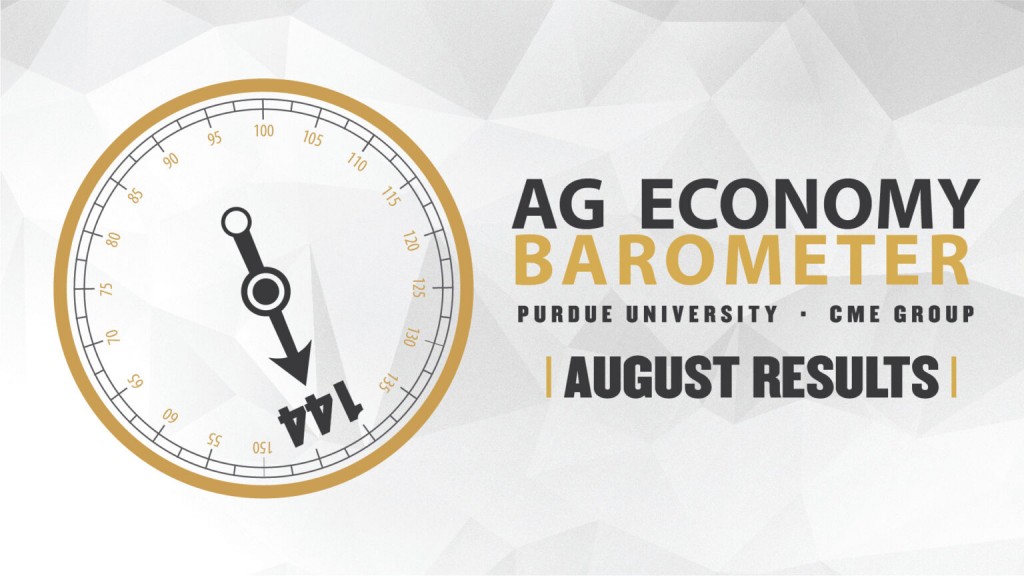 Farmer sentiment improved markedly in August as the Purdue University-CME Group Ag Economy Barometer rose to a reading of 144, 26 points higher than a month earlier. The improvement in producer sentiment was the result of improved perceptions regarding current conditions and, especially, better expectations for the future. The Index of Current Conditions rose 13 points in August to a reading of 124 while the Index of Future Expectations rose 33 points to a reading of 154. The Ag Economy Barometer is calculated each month from 400 U.S. agricultural producers’ responses to a telephone survey. This month’s survey was conducted from August 17-21, 2020.

The barometer and its two sub-indices all posted their most positive readings since February 2020 when record highs were established and before the pandemic began. The improvement in farmer sentiment this month was underpinned by expectations for excellent crop yields, as indicated in USDA’s August Crop Production report, and nearly across the board rallies in key ag commodity prices that took place in August. For example, compared to lows established in early August corn, soybean, wheat, cattle and hog prices all rallied during August.

The Farm Capital Investment Index rose 5 points compared to a month earlier to a reading of 65 which, similar to the other indices, was the most positive reading since February. When asked specifically about plans to purchase farm machinery in the upcoming year, fewer farmers (48 percent) in August reported that they plan to reduce their purchases this year than in prior months. It is worth noting that while 48 percent is a high percentage of farmers who plan to hold back on machinery purchases, this percentage has been declining since reaching a peak of 65 percent in May.

Farmers also became more optimistic about U.S. agriculture’s trade prospects in August. For the last several months the percentage of farmers reporting that they expect U.S. agricultural exports to increase over the next five years ranged from 55 to 57 percent. In August, the percentage of producers expecting exports to rise spiked to 67 percent. Although this is still less optimistic than in late 2019 and early 2020 when 70 to 72 percent of respondents said they expected to see ag exports increase, it was a notable departure in sentiment when compared to the April to July time frame and could be based in part on rising export sales to China this summer.

Each summer we’ve been asking survey respondents their opinion regarding changes in farmers’ equity position over the upcoming year. We first posed this question in August 2016 and have included it on the survey each August since that time. The percentage of respondents in the August 2020 survey who expect equity to decline in the upcoming 12 months, while still large at 38 percent, was the second lowest percentage since we launched our farmer survey and was well below a year earlier when 48 percent of respondents said they expected farmers’ equity to decline.

Many in-person educational programs and field days are transitioning to virtual events because of COVID-19 concerns. In our August survey, just one out of five (19%) of respondents said they attended a virtual field day or conference this summer, while 44 percent of producers said they are interested in attending a virtual conference or field day this fall or winter. When we asked respondents for their top reason for not attending a virtual educational event this summer, their responses were quite varied and ranged from lack of interaction with attendees (18%) to don’t have a computer (9%), poor broadband (9%) or too difficult to ask questions (6%). But over half of respondents told us there were “other reasons” why they chose not to attend that were not included in the list of responses we provided.