Another year, another flavor of COVID-related disruptions, this time the Omicron variant that’s spreading rapidly and disrupting schools and workplaces. But it isn’t 2020 all over again – too many lessons learned, too much resilience has been built up to see a full return to the massive economic and social dislocations of the past.

That’s especially true in dairy, where, despite all the marketplace challenges, demand has only kept growing.

The data don’t lie: Per-capita dairy consumption in the U.S. has been growing and is at the highest levels since 1960. Exports in 2021 are on pace for a record. We already knew that. Now, with last year’s retail sales data available, we can see that 2020’s gains in grocery-store purchases weren’t just a rechanneling of lost school and restaurant business toward at-home consumption. By comparing 2021 with 2019, we can see that dairy’s gains are built to last, according to data from industry researcher IRI. 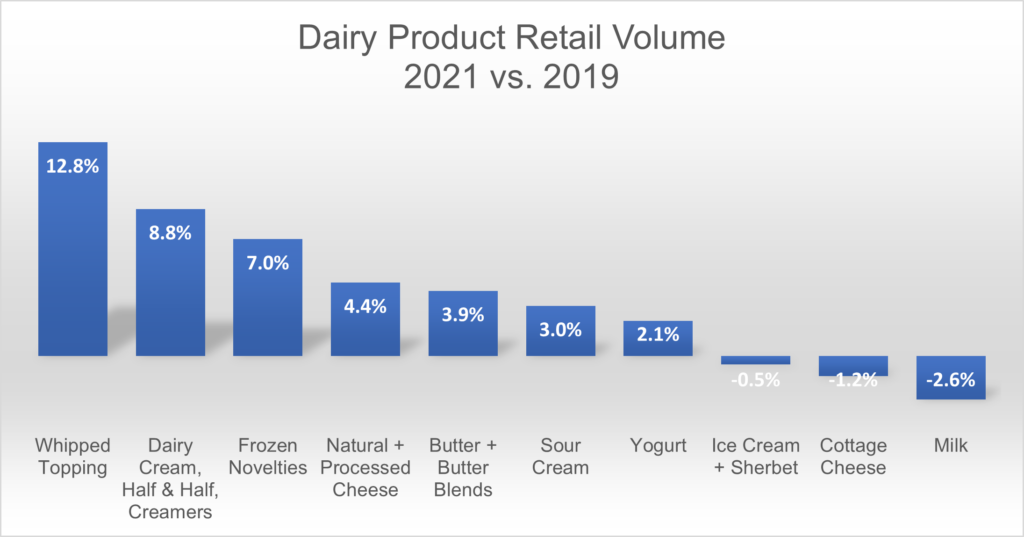 Cheese is up. Butter, up. Yogurt and sour cream, up. Fluid milk declined as consumers shift toward dairy in other forms, but even that category had bright spots. Because grocery-store milk prices have increased, actual fluid-milk revenues rose nearly $900 million over the past two years. That’s actually a bigger gain than plant-based beverages, which saw sales of their more-expensive products rise only $513 million.

And fluid’s decline wasn’t uniform across all categories: Whole milk consumption increased 0.5 percent over the past two years and is now well-established as the most popular variety of conventional milk, showing that fluid milk is more popular when it tastes more like milk.

The facts show it, once again: Dairy is alive, well and growing. The products dairy farmers and cooperatives labor to create every day are only increasing in importance to U.S. consumers, and even more so worldwide. The trend is so consistent that restating it is almost becoming tiring to say.