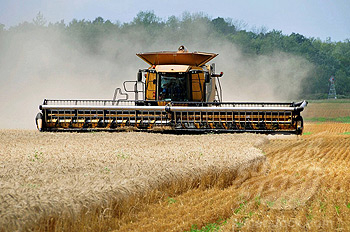 The wheat market had a strong performance during Wednesday’s trade. According to Rick Hollister, grain merchant with The Andersons, part of the rally was to play catch up. The other part is yield uncertainty as harvest is in full swing.

“There is a lot of concerns at the moment where we’re starting soft red wheat harvest, especially in Illinois and Indiana, and a little bit in Michigan,” he said. “We’re a little suspect on the yields at this point because it did get really dry right when they were at the head fill stage.”

Soft red acres are at the lowest they’ve been in 100 years. Hollister said if yields are a little lower, it will have a big impact because of the lack of U.S. acreage. However, Russia and Ukraine are still holding strong.

“Private forecasters have downgraded the Russian wheat crop size, and we know the French soft wheat estimates are 21 percent, 22 percent less than their original estimates last year,” he said. “Not surprised we’re trying to catch up a bit, but we have such stiff competition around the world.”

Wheat harvest in Michigan began this week, and Hollister expected harvest to start next week. However, the dry, hot conditions pushed the wheat crop ahead.

“We’ve seen a little bit of wheat harvest at our Oakley, Mich. plant, and we’re trying to get a handle on yields,”” he said. “It’s a little early, but yields don’t seem to be bumper crop quality, but quality is pretty good. It looks like guys are in the habit of treating this wheat with fungicides. Looks like the wheat is testing extremely low for vomitoxin, so that’s a positive as well.”

Hollister talks about crop conditions, weather, and shares his thoughts on what we could expect ahead of Friday’s Supply and Demand Estimates report in the audio player above.