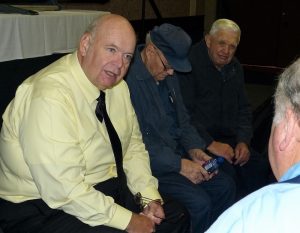 Bob Utterback won’t say he is retiring. He prefers to use the term hanging up his spurs. But he has sold Utterback Marketing Services to Commstock Investments, effective this month. So, the long-time commodity broker and analyst will no longer be delivering his insights built on many decades in the business.

“I was always called the bear in both physical stature and mental positioning,” he explained. “But I always took that attitude because farmers by themselves are always optimistic. They have to be, I think, to be in the occupation they are. But that optimism, which is a great attribute to have, many times made them do things that was not in their best interest and by trying to keep them focused on the farm management side of the business, on the profitability of the business, keeping the costs down, keeping the revenue constant, that to me was my function that I think I served.”

Utterback made the rounds after graduating from Purdue in 1974 before settling in Indiana, just south of Lafayette in New Richmond.

“I went to Oregon State in 1977, worked for Illinois Farm Bureau until about ’82-‘83, and then I went to Milwaukee as a senior analyst for Top Farmer, basically a product that no longer exists. And then I think it was ‘92 or ‘93, I became an independent broker.”

At one time he taught a 1-hour technical analysis class at Purdue under Chris Hurt. Now as Utterback looks to the next five years, he predicts “an uncomfortable” period for farmers.

“The whole influence of the outside variables of global markets, the political tensions, the combination of demand and supply seems there are as many outside variable influences as I’ve ever seen,” he told MAT. “And with the big money that can come in from the funds, the swings can be significant. And when the swings become significant, emotions are basically amplified. And that’s when usually clients make the worst mistakes, when they’re under tremendous pressure from the markets, prices, high costs.”