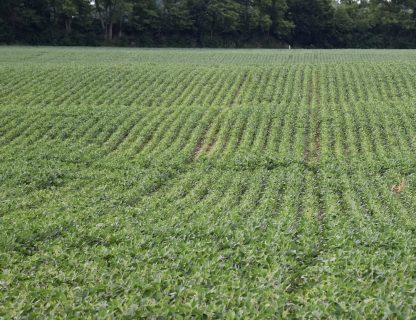 After all the planting delays we had back in 2019, some Michigan farmers are considering early planning.

Mike Staton, MSU Extension soybean educator, talked with one producer in the state who said he had the best planting conditions for the entire spring season before April 15. With wetter springs, Staton says this is a great tool to manage that risk and get a bigger planting window.

“You might have a hit or miss yield advantage planting that early, but most of the university data says no—planting that last week of April or first week in May is the optimum time,” said Staton. “If you go much earlier than that, don’t really expect a yield advantage.”

Looking at the long-term forecast for parts of the state, temperatures will be in the 40s to 50s the next couple of weeks. Some farmers might think the temps would be a little cool to plant soybeans, but Staton says that doesn’t matter much.

“What you don’t want is cold, wet soils,” he said. “You can have cold soils if the seed is high quality. I recommend [farmers] run the accelerated aging test on the seed lot you think you’re going to plant and understand how to interpret the results.”

If you are considering planting early, Staton suggests getting high-quality seed that’s been treated for sudden death syndrome and pythium. Adjusting your planting depth will also help.

“Coarser-textured soils are going to be a prime candidate—crusting is not generally a problem,” said Staton. “You could sock that seed down 1 ¾ inch—don’t ever go any deeper than two inches. The seed will sit there in a more uniform environment and sit there dormant. When things warm up, they’ll be ready to go.”

For those who do plant their soybeans before the Risk Management Agency’s earliest planting dates, you will be ineligible for replant coverage. More information from Staton and MSU Extension is available here.