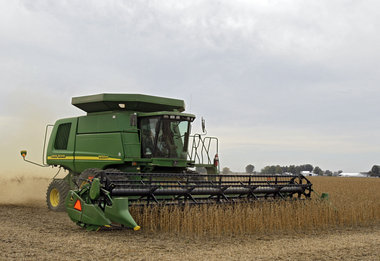 In USDA’s weekly Export Sales Report on Thursday, the U.S. has commitments for 1.18 billion bushels of soybeans, which is 56 percent of the entire marketing year projection. That’s a record, and 22 percent ahead of the five-year average.

Those numbers, combined with a slight risk premium out of South America are helping soybeans continue their climb higher.

“Brazil is basically out of exportable soybeans—there are thought they’re going to have to import soybeans,” said Karl Setzer of AgriVisor. “Brazil always imports some, but they’re have already purchased 400,000 metric tons from Paraguay. We have all these small factors working for soybeans, and we’ve seen these big gains.”

Since the August USDA Crop Reports which were published Aug 12, soybeans have rallied 15 percent. Setzer said this is the greatest rally in the shortest amount of time. Setzer said at any given time, this market could fall because of the same reasons that are driving it higher.

“The rally we’re seeing in the CBOT futures is encouraging more plantings in Brazil,” he said. “Brazil is probably expanding their acres about 6 percent this year—that’s nearly a million acres of soybeans they’re going to bring into production, and that’s off the last rally and not what we’ve seen so far. If we see values keep going, we’re going to keep seeing more plantings in South America take place.”

The other thing producers should watch is that the market is overbought. The 14-Day Relative Strength Index shows the market is currently positioned at 85 percent.

“Anything over 70 percent is considered overbought,” said Setzer. “We are at the verge of seeing a major correction—that’s what caused soybeans to falter earlier in the week. If we see a hint of a lower market coming at us, we see this big flush of sellers and we drop backwards.”

The third thing Setzer advises growers to watch is our export business with China.

“Nearly 55 percent of what we’re selling on a weekly basis is going to China,” he said. “Sooner or later, China is going to say they’ve had enough, and they’re going to back away. Once they do that, that takes away over half of our export sales.”

Despite that 56 percent of commitments, Setzer said we could still be lower than USDA’s projections, even with the large flash sales of soybeans.

“Some analysts are thinking we’re getting front loaded,” he said. “I don’t think we’re going to come in and all of a sudden soybeans are going to fall apart on us.”

From a technical front, the next initial line of support is $9.54 per bushel.

Setzer talks about the corn and wheat markets, a potential La Nina setting up, and how China is starting to auction off some of their frozen pork reserves in his full audio above.