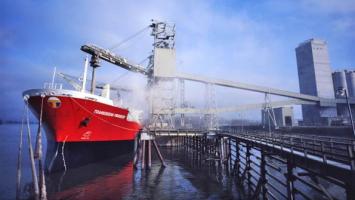 China has been primarily focused on purchasing U.S. soybeans with the occasional flash sale of corn for the last year. In three days this week, China has purchased 3.7 million metric tons of U.S. corn. Friday morning, USDA announced another flash sale to China of 2,108,000 mmt, making exports to China for the week of January 25 at 5,808,000 million metric tons

Setzer said there are multiple reasons for these large purchases, but he’s narrowed it down to three. The first is probably the most basic: China needs corn.

“For several years, China has been cutting back on their corn production—they’ve been pushing more acres into soybeans,” he said. “China had this tremendous corn supply, and it’s quality was questioned. We were told China was sitting on two-thirds of the global corn supply.”

During the time those acres were being used to grow more soybeans, the ethanol industry was taking off. Setzer said China also was caught off by how quickly the hog herd has rebounded after losing nearly 50 percent of it to African swine fever (ASF).

“China just needs corn,” he said. “They do it at a time when Brazil had exhausted their supplies, Argentina is not exporting their corn due to the high tax rates they’ve had, so where does China have left? The United States.”

The second reason is that South American soybean harvest is starting.

“China was more worried about their soybeans—production, stocks, buying tremendous amounts of Brazilian soybeans, and then came to the U.S.,” said Setzer. “Now they’re focusing on the Brazilian soybeans that are being harvested, and that opens the door for the United States to start selling more corn because our ports will start emptying out of our soybean shipments in the next two to three weeks.”

Setzer said the third main factor in these recent large purchases of corn is that China fell behind on their commitments for the Phase One Trade Agreement. In the first year of the agreement, China bought $30 billion of agricultural products of $100 billion total goods. That makes up roughly 58 percent of what China planned on purchasing.

“China was telling us they were going to buy $173 billion worth of goods so there’s a little bit of saving face there,” said Setzer. “China is very big on how they look to foreign buyers and foreign suppliers, so they want to step in and buy corn.”

Chinese officials have already reached out to the Biden administration to request a meeting to overhaul the Phase One Agreement and obtain a more long-term policy approach.

Setzer talks about his concerns if corn demand can remain strong and if these purchases have anything to do with a change in administrations in his full comments in the audio player above.