When corn and soybean harvest ramps up in Michigan, farmers will want to make significant progress in a hurry. Dan Cable, Field Sales Rep for Specialty Hybrids says some harvest has begun, and one operation near the Ohio-Michigan state line reported early soybeans went off at 53 bushels per acre, with the expectation of better yields to come.

He says corn yields could also surprise this year, at least in some areas if not widespread. 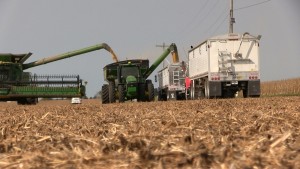 “I got a customer that’s up northwest of Lansing that could have as good a corn as they had last year, and down through the western part across the central part of Michigan there’s definitely going to be some good corn. When you get to the southeast corner of Michigan where I actually farm and reside, we have been really short on rain in areas, so we’re going to be a little below average on the corn crop. I believe we have farms that haven’t had five inches of rain since the 1st of June.”

Cable says the concern is stalk strength. Dry down of corn is progressing rapidly after some very hot and windy weather recently.

“We did not see widespread tar spot, but we did find some in areas,” he told MAT. “Maybe we didn’t see it because there were a lot of people that were proactive and treated for it early, but we just didn’t have it. But this corn crop is still drying down really fast and I think it’s something we’re going to want to be conscious of.”

And he says that will lead to some urgency to get off to a good start.

“There’s potential we could have some stuff fall apart before we get to the end of October when most people are used to finishing up, absolutely.”

Cable adds there will be some short beans and growers will want their machine set up properly to get them all. It has been dry enough in southeast Michigan the last month that bean size will be small.