We are slightly little optimistic in the planting forecast this time around, as we have seen the upcoming moisture chances lessen a great deal over Michigan. However, there are still a couple of hurdles to over come in the next 10 days to two weeks, but in general, we should escape rather favorably on new moisture. The biggest hurdles will be drying (from the recent rains) and cooler air that will remain pesky over Michigan.

Partly sunny skies and warm air in the forecast for Saturday over the entire state, although admittedly the clouds will be thicker in the northern part of the state and the northern Thumb. Temps will be well above normal, and we should see excellent evaporation. Breezy conditions will help with drying all day. Sunday looks great too, as a disturbance coming across the eastern corn belt stays well to our south. WE should be partly to mostly sunny on Sunday, with temps similar to Saturday early, but falling off in the afternoon through overnight (cooler air sagging in out of Canada).

Starting Monday, our upcoming week actually looks significantly drier than where concerns were most of this past week. We really can lump Monday through Thursday together in this forecast, looking for partly to mostly sunny skies, and nearly seasonal temps, of not slightly below normal. We should see good evaporation most days. We cant rule out a few showers over western Michigan on Tuesday, but they are very disorganized, and will end up with coverage less than 20%, and totals under a tenth or two. Not a big threat the way it looks right now.

Late in the week, on Friday we have a very well organized system crossing the Great Lakes region, and it makes a direct hit on Michigan. We expect rain totals to be from .25”-.6” with coverage at 100% of the state. Everything id done by midnight Friday night. However, much colder air blasts into the state behind that system, and temps will be well below normal. Colder, Canadian high pressure dominates for the weekend period, Saturday and Sunday .We will see drying, but with the cooler air, it will be a slower dry down. Still, that means over the next 10 days, we really have only one system to see moisture out of. 10 day moisture potential is shown on the map below. 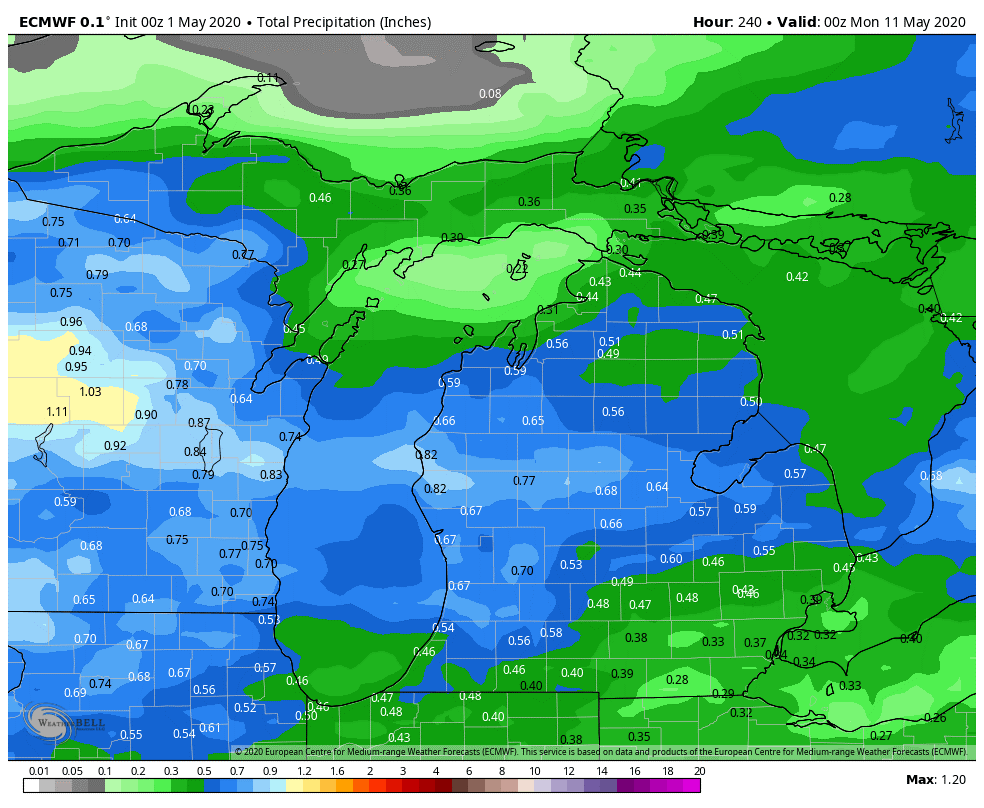 The following week has the extended 11-16 day period starting dry for Monday through Wednesday, the 11th-13th. However, we are chilly Monday and Tuesday. Then scattered showers move across the region Thursday the 14th with a quarter of an inch or less and 60% coverage. . Lingering showers probably stay south of us for Friday the 15th, but we will need to monitor that to guard against a northern move. But, then we turn out partly sunny to finish the extended window on Saturday the 16th.

Nothing to out of the ordinary to report for our extended week 3 and week 4 period. Overall, temperatures look normal to slightly below, but nothing that is concerning on cold air. Precipitation looks to be nearly normal too. Generally, in May, we expect to see one good system per week…while the maps below show us “in the green” in parts of the ECB, notice that the amounts above normal are pretty small. The biggest take away from this map should be that southern areas that are inline to get the bigger threats of moisture in the next 10 days and next 16 days are still in line to see the bigger moisture potential on through the second half of the month. 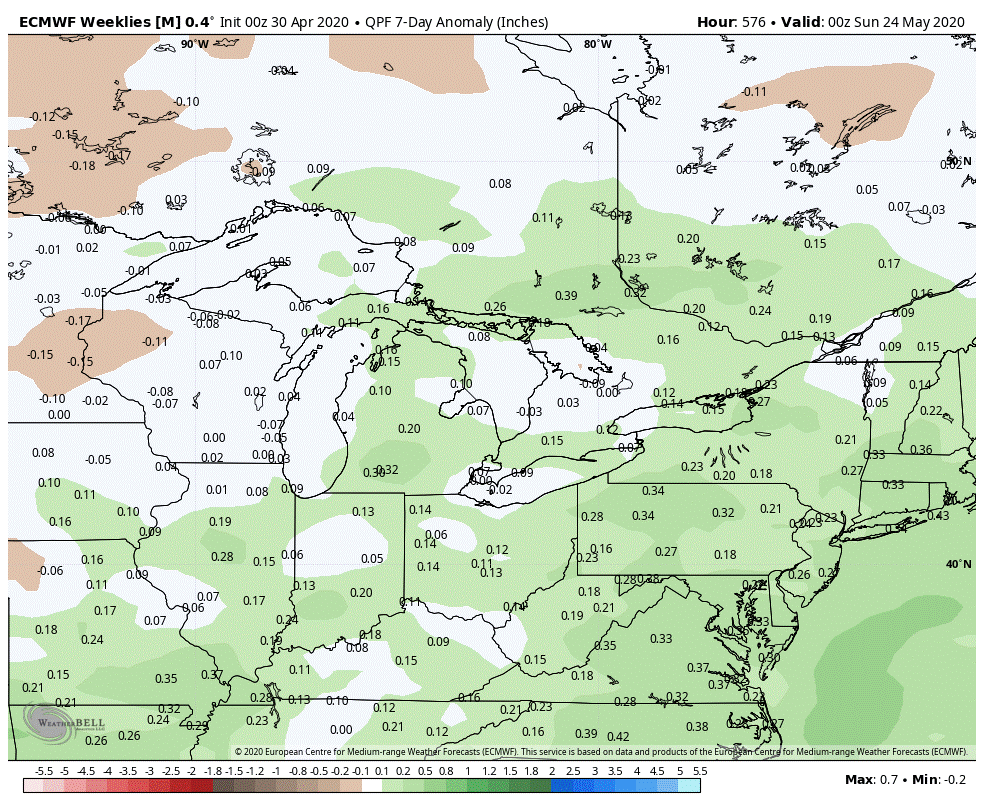 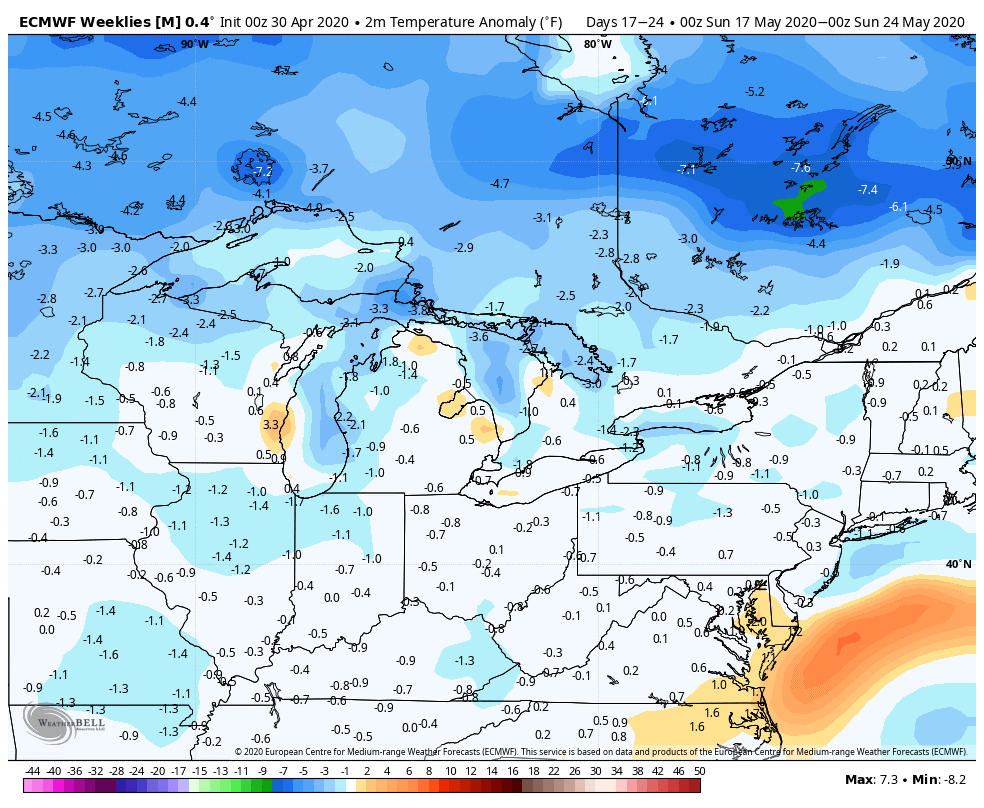 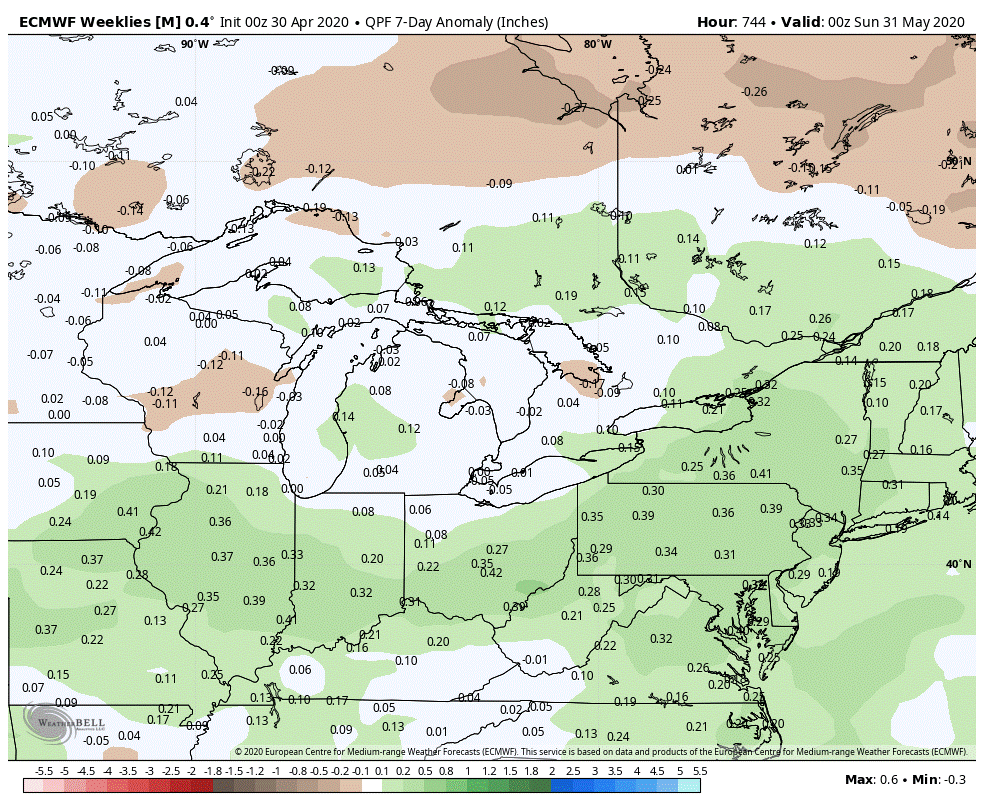 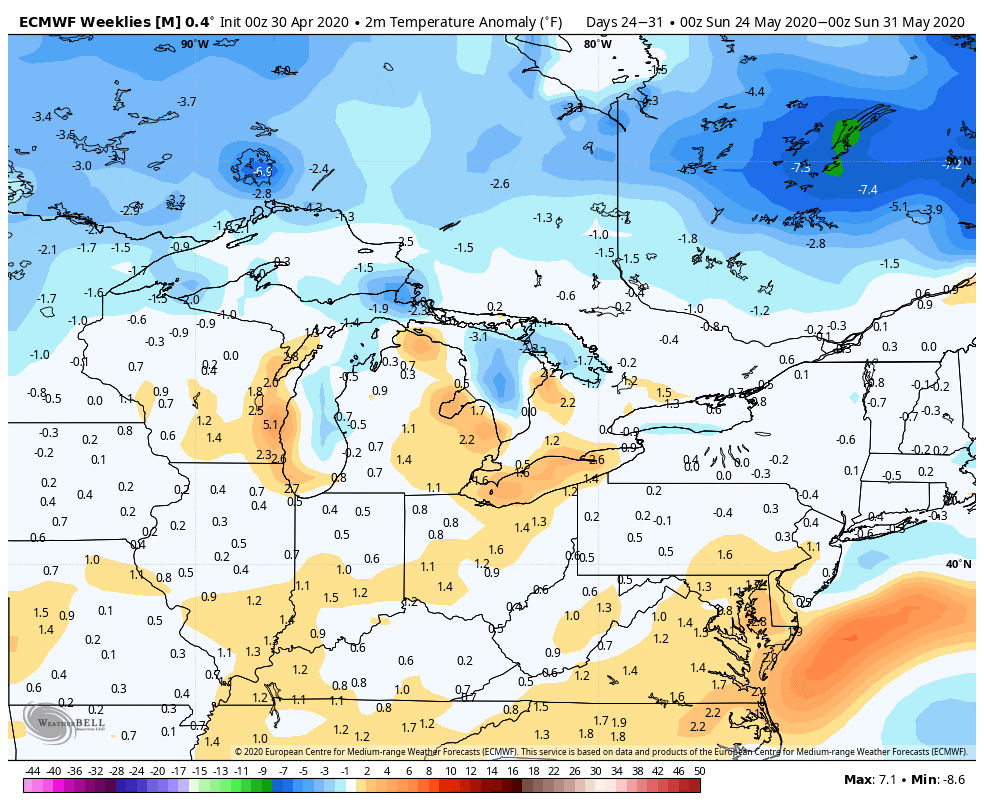