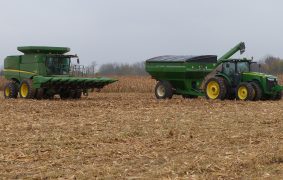 80 percent of Michigan’s soybeans have been harvested, four points more than last week, and 14 points behind the state’s five-year average and national soybean harvest progress of 94 percent complete.

According to USDA-NASS, there were 3.7 days suitable for field work last week.