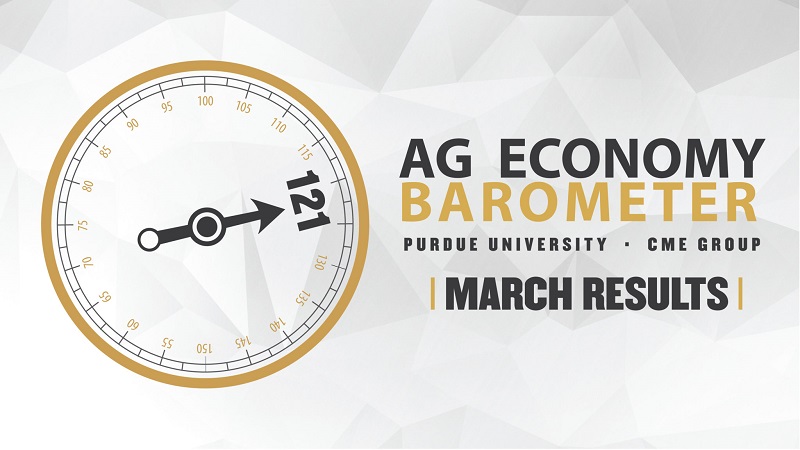 The Purdue University/CME Group Ag Economy Barometer fell 47 points to a reading of 121. That is the largest one-month decrease in the history of the index that began in 2015.

The drop from the all-time high of 168 is credited to lower commodity prices and the impacts of COVID-19 as it relates to on-farm profitability in 2020.

“74 percent of the farmers in our survey this month said they were either fairly worried or very worried about the impact of the virus on their farm’s profitability,” said Jim Mintert, director of Purdue University’s Center for Commercial Agriculture. “That spilled over into an impact on the Farm Capital Investment Index as well, which fell to a reading of 54 from 72 a month earlier. That’s the lowest reading we’ve had on that index since last fall.”

Index of Current Conditions and the Index of Future Expectations also experienced their largest one-month drop since the barometer started.

There was a drop in confidence in resolving the trade dispute with China. Mintert says perspective changed compared to the other readings from this year.

“Only 47 percent of the farmers in our survey this month so they thought resolving that dispute would take place quickly, versus 61 percent a month earlier and 69 percent two months ago,” said Mintert.

When asked if the trade dispute with China will be resolved to benefit U.S. agriculture, there was a lack of faith.

“68 percent felt that way versus 80 percent a month earlier,” he said.

The final highlight of the report shows that 62 percent of farmers are expecting to receive a Market Facilitation Program payment on their 2020 crop. Last month, 45 percent of barometer participants thought they would get a payment.

The full report can be found here.