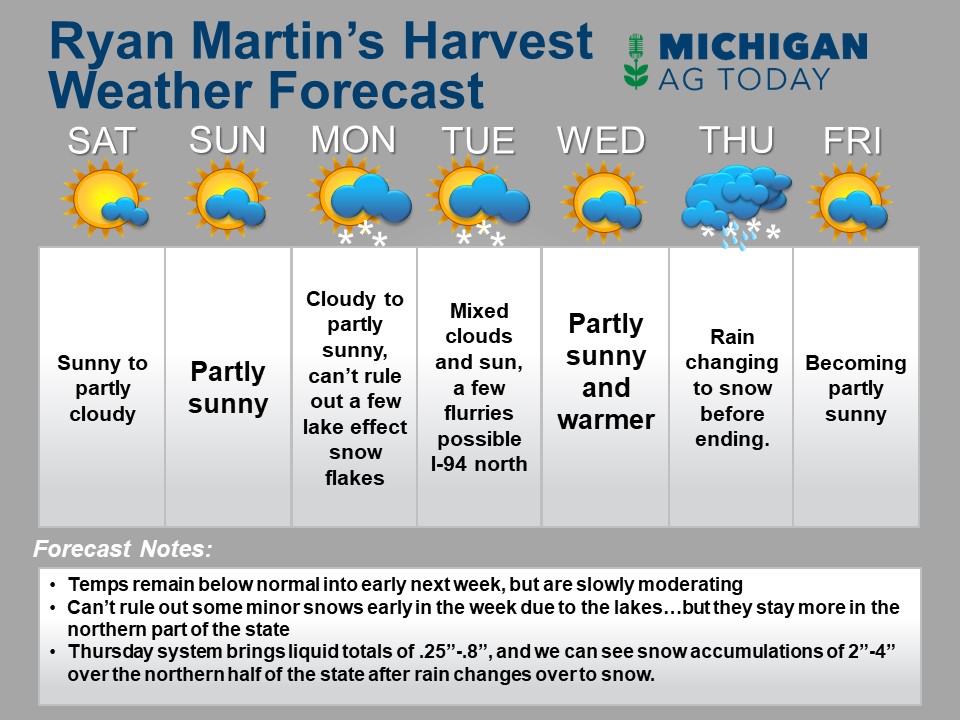 We get a nice little dry window this weekend, as lake effect of all kinds (clouds and precipitation) takes a bit of a break. Temps are trying to moderate a bit as well, but we really expect that we are not able to move above normal anytime soon. As temps moderate sunshine will be more dominant this weekend

There is a minor disturbance that drifts across the central Corn Belt this weekend that looks threatening into IL and WI on Sunday, but we think a large part of that moisture falls apart late Sunday evening and overnight. Still, we likely are left with clouds trying to move across Michigan on Monday, and we won’t rule out some lake effect snow overnight Sunday night along the western and northern edges of the state north of I-96. Clouds will linger though the entire day Monday. Tuesday lake effect clouds hold over the state, with some sunshine mixing in. With the clouds, it won’t take much to trigger flurries down to I-94, but the overall scope of action will be insignificant.

Temperatures do try to warm substantially next Wednesday, especially afternoon. We see the best warming from I-94 southward, and it’s all due to strong south flow. If we have a chance of being above normal on our temps at all, next Wednesday afternoon/evening will be the period to watch. This will be just ahead of our next well-organized weather system. That system arrives Thursday, with rains likely. The rains likely end as snow. Low pressure tracks right across southeast Michigan. We like liquid equivalent precipitation totals from .25”- .8” with 100% coverage. Over the northern half of the state, after the rain switches to snow, we end up with 2-4 inches.

We try to clear out quickly behind the front, allowing partly sunny skies to emerge for the balance of Friday, but lake effect snows continue along the entire western edge of the state (eastern shore of Lake Michigan.

Next Saturday and Sunday we turnout partly to mostly sunny over the entire state. Cold temps hold, but new precipitation is not likely. The map below shows 10 day combined moisture potential, in liquid equivalent – highlighting the effects of the lakes over the next 10 days. 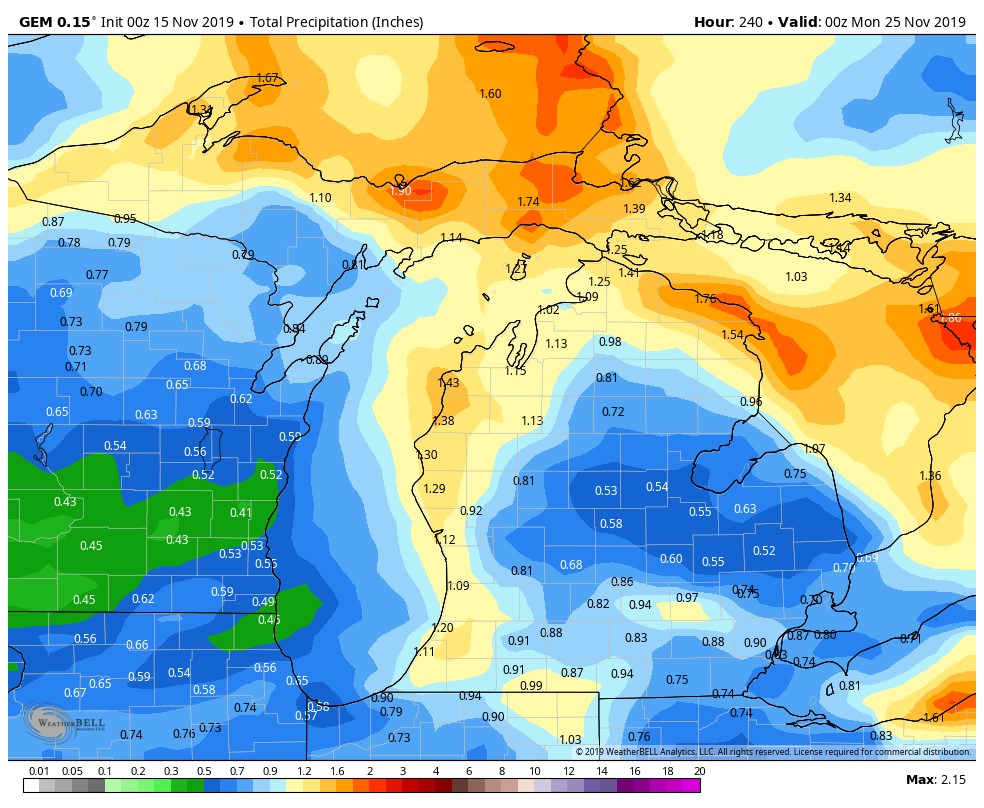 Dry to start the week of Thanksgiving, with clouds and some sun for Monday the 25th. Tuesday clouds dominate and we can’t rule out minor moisture…showers of rain or wet snow, but liquid equivalent totals will be .2” or less. Dry for Wednesday and Thanksgiving Day, although clouds will be starting to increase on thanksgiving. That leads to a chance of rain showers overnight Thanksgiving night into early Friday morning (29th). Moisture totals there are again light, .3” or less. Dry to finish the extended period (and month) with a mix of clouds and sun for the balance of Friday the 29th and Saturday the 30th.

Drier pattern for week 3, then we get active for week 4. The temperature pattern that begins in the 11-16 day pattern looks to continue and build through weeks 3 and 4, with near to slightly above normal temps in week 3, and then above normal temps possible in week 4. Therefore, we continue to believe that the early season cold snap we just experienced is likely to not repeat for several weeks. 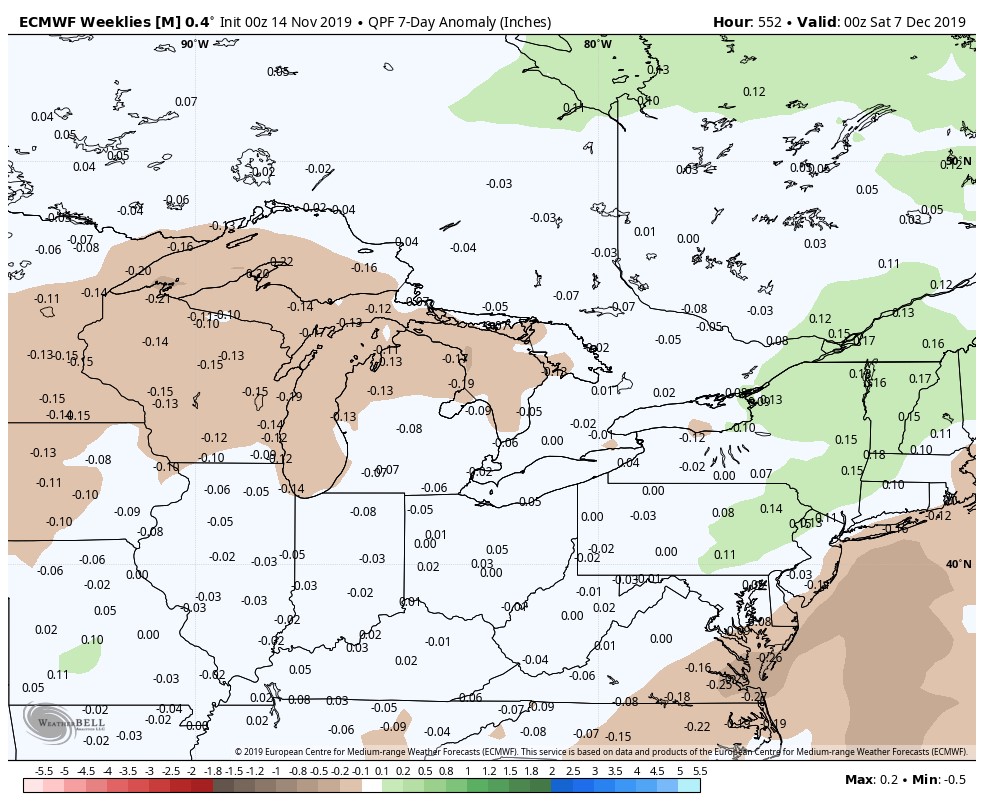 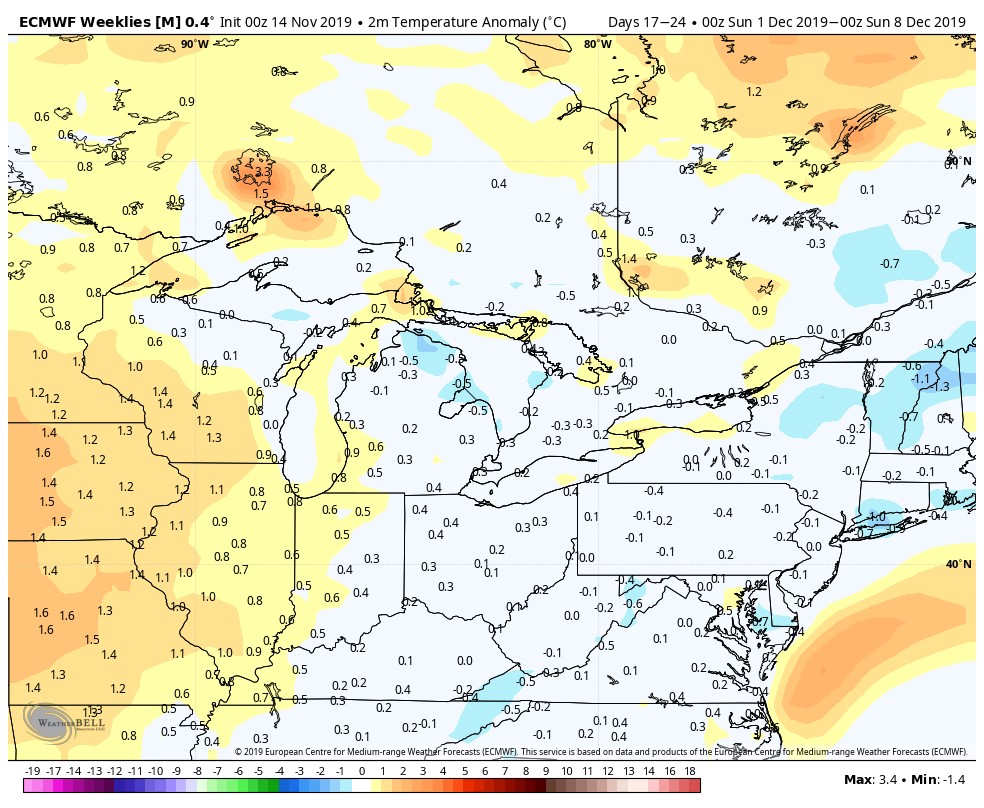 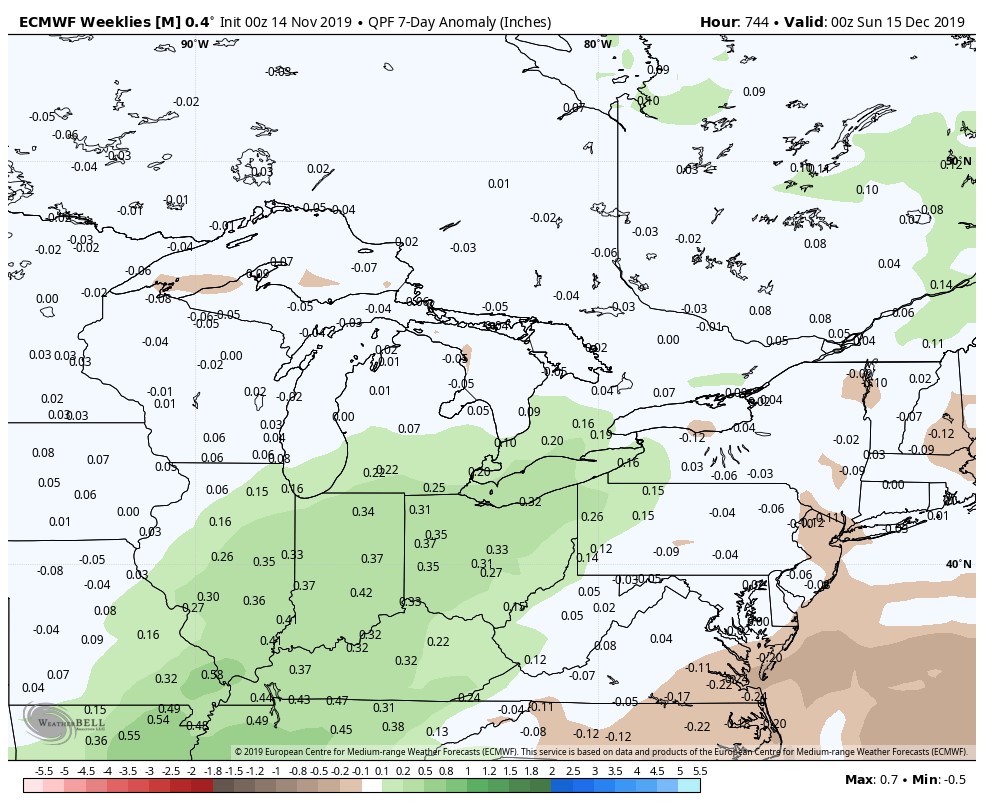 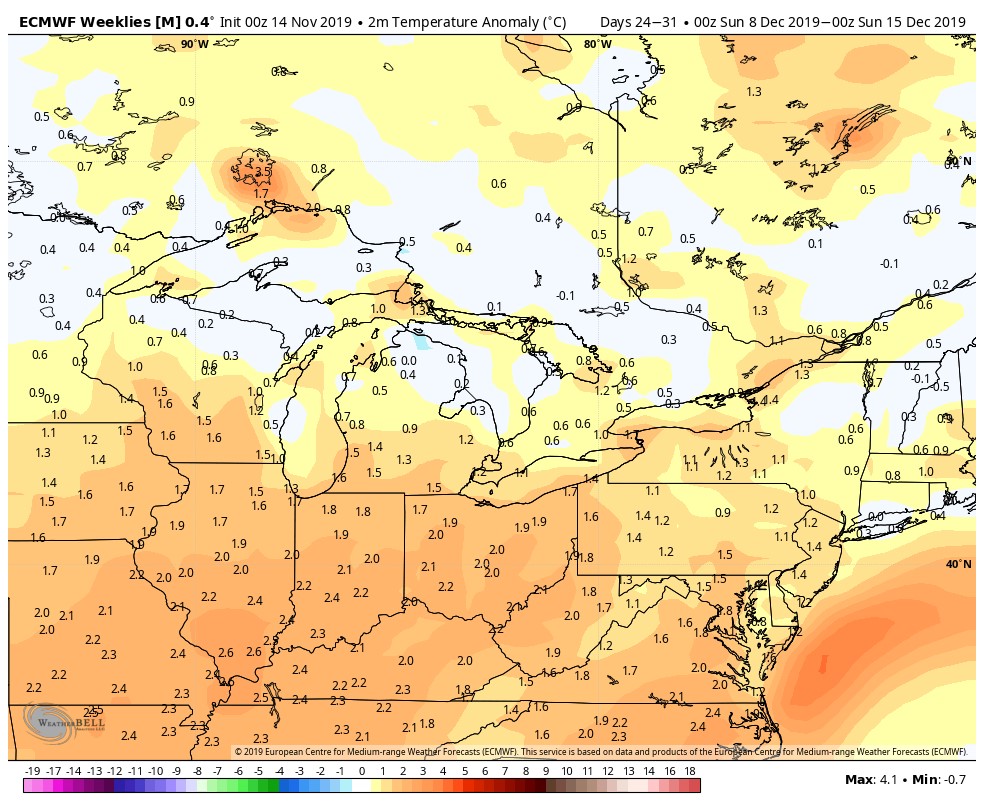