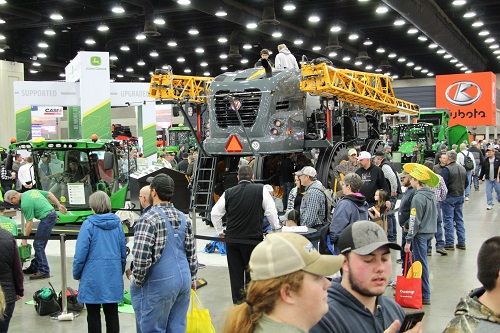 Billed as the largest indoor farm show in the country, The National Farm Machinery Show is in full swing this week in Louisville, KY. Each year this event attracts over 300,000 guests and boasts of 1.2 million square feet of exhibit space. The show is also a good place to measure the health of the farm economy and to check the mindset of farmers just a few weeks before they head to the field.

This year a strong sense of optimism about 2020 was noted. The crowds were upbeat and actively engaged with exhibitors. Much of the buzz at the show concerned the new planters being displayed by Kinzie and John Deere. The Kinzie 4505 planter is a high speed planter allowing producers to get their crop planted quicker by using higher speeds across the field. True Speed technology accurately achieves results at true higher speeds, consisting of a new high-speed electric meter and seed delivery tube to provide row crop farmers with seed placement at speeds from 3 to 12 miles per hour.  The unit is available in a 36-row 20-inch configuration.

John Deere has a new planter  on display at the show that is causing a lot of excitement. Deere is emphasizing a customer’s ability to update older machines with new Precision Ag Technologies and Performance Upgrade Kits. With working capital in tight supply this year, more and more producers are turning to retro fit rather than buying new, according Greg Peterson with Machinery Pete. Peterson told HAT farmers are also looking closely at equipment on tracks, “After the two wet years we have had here in the Midwest, farmers are how considering more equipment on tracks.”

In addition to the latest in production technology, a Championship Tractor Pull is underway. More than 70,000 fans will fill Freedom Hall February 12-15 to watch the nation’s best drivers battle for a grand champion title and more than $200,000 in prize money.