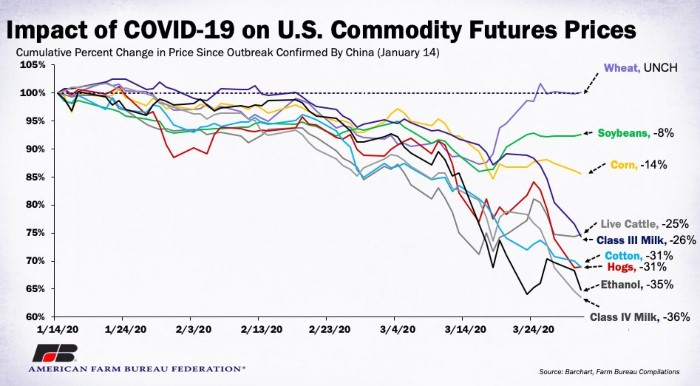 Commodity futures markets have been hit hard by the impacts of COVID-19. The shutdown of schools and near-closure of food service has nearly zeroed demand for many products.

“Ethanol prices were down significantly, as were many livestock and dairy products,” said John Newton, chief economist for the American Farm Bureau Federation (AFBF). “We’ve also seen pretty steep declines for corn and soybeans and increased volatility for wheat.”

According to AFBF, ethanol fell 40 percent, corn prices have dropped 15 percent, and soybeans are down 10 percent. Newton says the downward price movement in the commodity markets is making it next to impossible for farmers to be profitable.

“They’ve seen their returns diminish significantly,” he said. “Longer term really depends on how long of a tail we have on this, when the U.S. economic recovery efforts get underway, and when restaurants and other parts of the food service sector are up and running again.”

The damage to ag has been extensive. Not one industry is making it out unscathed at this time. Newton adds it’s early to know what the larger picture of the farm economy will be.

“When it comes to where we end up on farm income, I think it depends on what the administrative aid packages look like. It depends on how the stimulus efforts to the wider economy help, and what our crop growing conditions look like this year.”

Since the beginning of 2020, beef and pork futures have fallen more than 30 percent. Milk used to make cheese is down 28 percent and milk used to make nonfat dry milk is down 34 percent.

“The resilience of farmers and ranchers has been nothing short of stunning, but we must not take for granted their ability to hold on with prices spiraling, taking all hope of breaking even with them,” said AFBF President Zippy Duvall. “I stand by my assurance that our food supply remains strong, but America will have fewer farms and ranches supplying it unless USDA acts quickly to deliver aid and our economy is released from the grips of this pandemic soon.”