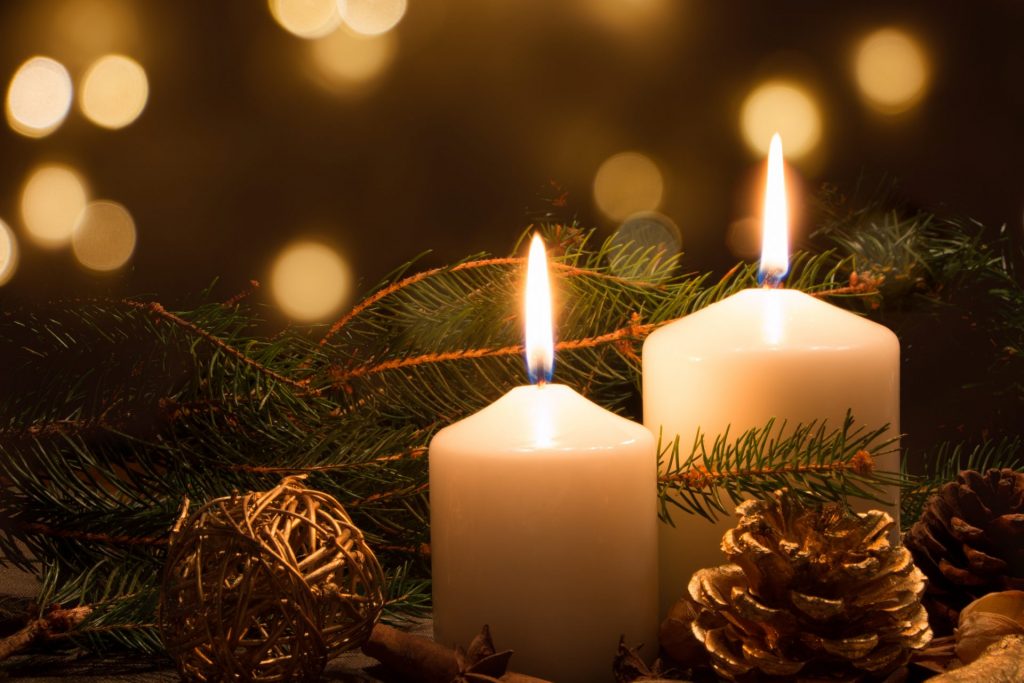 The Christmas season is often referred to as the Season of Light. While the original designation was more spiritual than literal, today most people also take the phrase literally and decorate with lights. Trees, houses, stores, and streets all start exhibiting festive holiday lights in November which stay on until January.

Throughout history, people have celebrated this time of year with light, although the kind of light has changed. Most of the lights we use today have only been around a hundred years or a bit longer. Edison’s incandescent light was invented in 1879; fluorescent lights first appeared in 1901; and Georges Claude patented the neon light in 1915. Halogen and LED lights were invented more recently.  Prior to these inventions, it was fire that provided light for our world.

Archaeologists estimate humans first discovered fire about 2 million years ago. There is evidence that, about 300,000 years ago, man had figured out how to use fire to  not only provide light and heat but make things like pottery and tools. For the next few millennia, wood, wax, oils, and other combustibles provided the fuel for fire. In 1790, gas was used to make the first gas light and, over the next hundred years, the gaslight became the dominant source of light on our streets and homes.

The light we use today is much different than the light used by our ancestors and that which was likely present in the stable in Bethlehem. Firelight has a natural, spiritual, and emotional  aspect not achieved by the bright, glaring, never changing light produced by electricity.  While I am not suggesting we go off the grid and move back to candles, a bit more candlelight might add a new dimension to your holiday celebration.

Our modern light often is accompanied by sound. From holiday carols over the radio, the babble of voices at family gatherings, cell phone ring tones, to the beeping of scanners at the grocery store, Christmas is a very noisy season. This year, the cacophony seems even worse with political arguments, mask debates, and pandemic numbers. If there was ever a year we needed a little peace and quiet, this is it. Maybe we could sing “Joy to the World” one less time and replace it with the less popular “Let All Mortal Flesh Keep Silent.”

So let me suggest that, this week, you take a few minutes and turn off the noise, turn off the lights, and light a candle. If you are lucky enough to live on a farm or in a rural area, far from the lights, traffic, and noise of the city, take your candle and go outside on a clear star-filled night.  Contemplate the flickering light, listen to the silence, and consider what this season means to you and to our world.