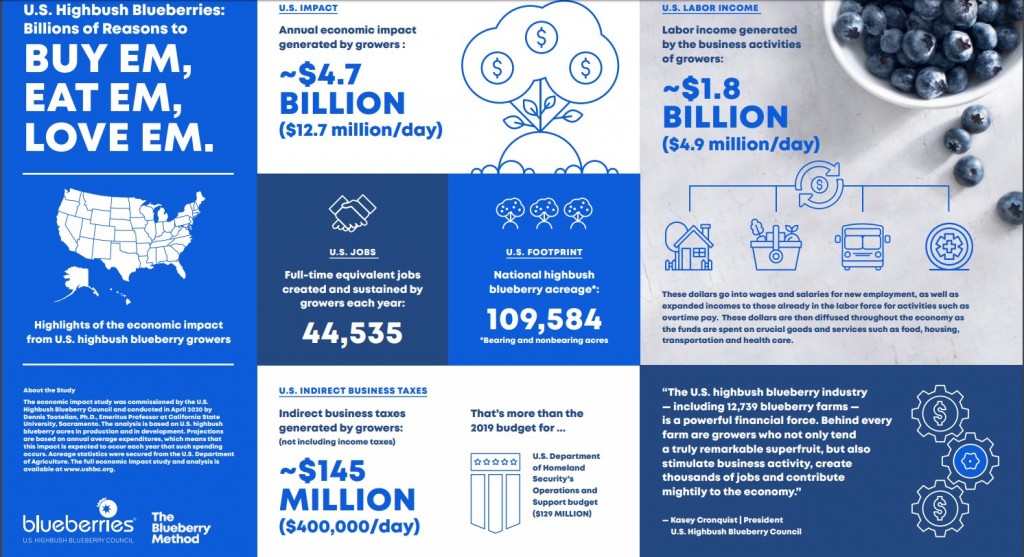 Blueberry season is still in full swing here in Michigan. As one of the top producers of the fruit in the country, it has a huge economic impact on the state’s economy.

The U.S. Highbush Blueberry Council (USHBC) conducted the first study of its kind to assess the economic impact blueberry growers have within Michigan and the country. By producing about 100 million pounds of blueberries each year, Kasey Cronquist, president of USHBC, that’s hard to ignore.

“The growers, they create and sustain 6,600 full-time jobs each year, and it’s those jobs within Michigan that generate $530.4 million in annual economic impact,” said Cronquist.

Those dollars help sustain jobs in areas such as equipment manufacturing, packaging, processing, and the facilities and other supporting services. Nationally, USHBC’s survey found that the economic impact of blueberry growers is estimated to be $4.7 billion annually, or more than $12.4 million daily.

“We just wrapped up National Blueberry Month, and this [report] was able to debut during that month in a way to celebrate what has been a long standing tradition of growing and a part of agriculture in our country we wanted to bring a lot more awareness,” said Cronquist.

With Michigan as one of the top five blueberry producing states, Cronquist said Michigan producers have a lot to be proud of.

“Michigan should take great pride in what their growers represent—not only in what it’s done for the state economy, but what it’s brought to their community,” he said. “It’s really remarkable what they’ve been able to grow there.”

The full survey can be found here.