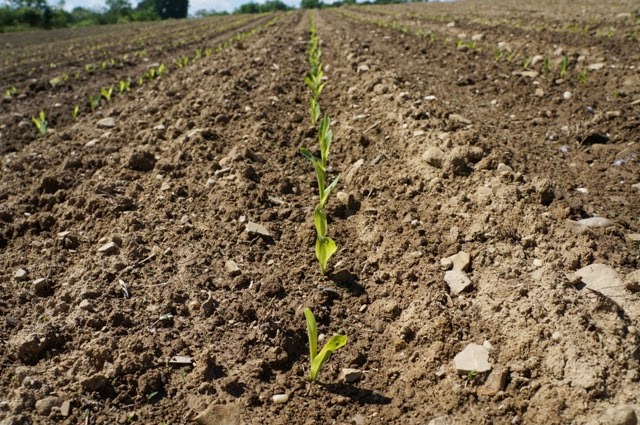 By the time Monday’s Crop Progress Report is out, Michigan’s corn and soybean growers will likely surpass the halfway point of planting.

The next step is watching those plants emerge. Mike Swoish, Pioneer agronomist, says having uniform emergence will reduce yield variability this fall.

“University of Nebraska data showed that if just one out of every four plants comes up a few weeks after the rest—which is entirely in the realm of possibility this year as early as we planted—that can decrease your maximum yield by 10 percent,” he said. “Pioneer data showed if you do a flag test after two days, we can lose about 80 kernels per ear, and after seven days, that number was almost cut in half by a seven-day delay in emergence for each of those plants.”

Flag tests are a great way to monitor emergence. Swoish says to do it on 1/1000th of an acre on a few fields that will be checked often.

“The goal is to see how well the planter was doing,” he said. “If you have variable soil types, you may want to check on a sandy spot and a heavier spot. The farmer will know their farm better than anyone. If you know there’s a spot where you usually don’t have uniform emergence, do the check there, and if you have a spot that’s usually high yielding, do a check there and compare the two.”

Growers can also use technology to monitor stand counts in corn and gap-analysis in soybeans. According to Swoish, that can be done with a software called Drone Deploy.

“It saves a lot of time—you place your points on phone or tablet, the drone will go out and fly at a pretty low altitude, take pictures, and in real time it will count the number of plants and come back with a colorized display across the field of what percent of the stand is actually there,” said Swoish. “That can help with replant decisions or checking uniformity across soil types. With corn, it will give an actual plant count, and with soybeans, it will give a gap-analysis.”

To learn more, talk to your local Pioneer agronomist.