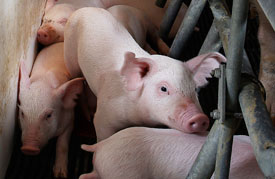 The U.S. pork industry is dealing with yet another blow this summer. Last week, the 9th Circuit Court of Appeals denied a joint complaint from the National Pork Producers Council (NPPC) and American Farm Bureau on California’s Proposition 12.

Prop 12 establishes minimum space requirements for breeding pigs and egg-laying hens in the state. It also prohibits the sale of pork, veal and eggs from states that don’t have the same space qualifications as California.

“That’s going to be so hard on all of the pork producers in the country,” said Mary Kelpinski, CEO of the Michigan Pork Producers Association (MPPA). “If they want to try to add space to their operations, [some] are saying it could cost about $3,500 per sow to make improvements or make changes in their operation to adhere to California law.”

She said California imports a lot of pork because there are very few hog farms in the state.

“There’s no real benefit in Prop 12 for consumers or producers,” said Kelpinski. “There’s no food safety benefit, there’s no health benefit, and it’s going to raise the cost for food for everybody in California. There needs to be science behind any of these rules, and there’s no science that backs the 24 square foot per pig that California has.”

No formal appeal has been filed yet. However, NPPC Assistant Vice President of Communications Jim Monroe issued the following statement: “We are disappointed in the court’s decision and maintain our position on Prop 12: It is a clear violation of the U.S. Constitution’s Commerce Clause. We are evaluating the decision and our next steps.”