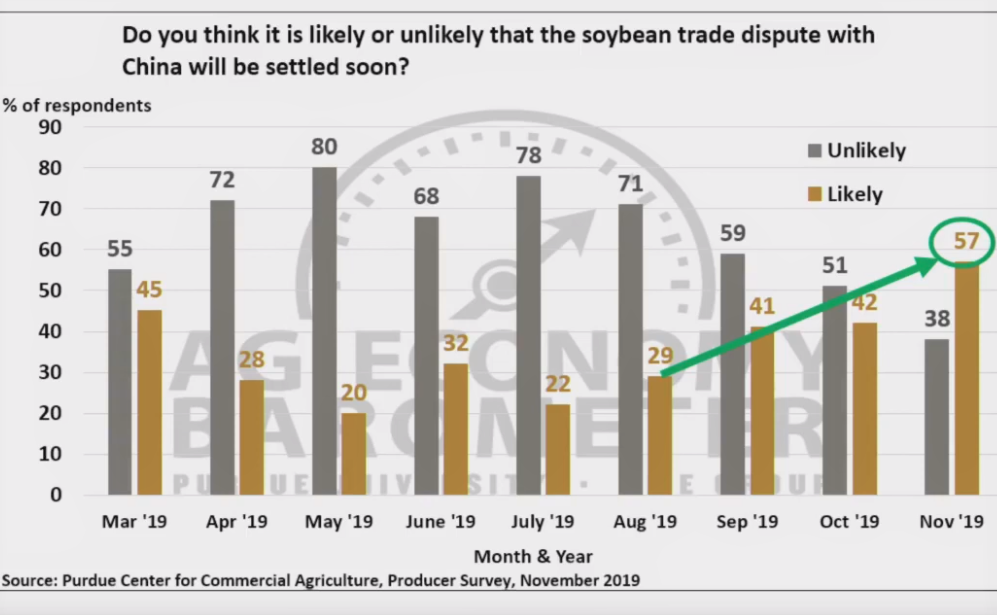 Another jump in the Purdue and CME Group Ag Economy Barometer has that metric now tied for the best of 2019. The barometer jumped for the second month in a row and went to 153 in November, a 17-point gain from October.

Sentiment towards the ag economy improved in several areas, according to the 400 U.S. producers of crops and livestock who were surveyed in the middle of November. A rally in cattle prices and better than expected crop yields in many areas contributed, and Purdue ag economist graduate research assistant Kylie O’Connor says confidence in securing a trade deal with China is improving.

“We have been asking farmers if they think it is likely or unlikely that the soybean trade dispute with China will be settled soon, and 57 percent of respondents in November said that a trade resolution was likely to come soon which is the most positive response we have had since we began posing this question in March of 2019,” she said. “We also asked farmers if they felt a trade resolution with China would be beneficial to U.S. agriculture and 80 percent said that it would be beneficial.”

Those more immediate factors led the Index of Current Conditions to the biggest jump, going 38 points higher. The Index of Future Expectations rose 7 points, the result of a modest number of additional producers believing that current and future economic conditions will continue to improve.

This month’s report also looks at producers’ views on farmland values at both 12-months and 5-years out. Read the full November Ag Economy Barometer report at https://purdue.ag/agbarometer.