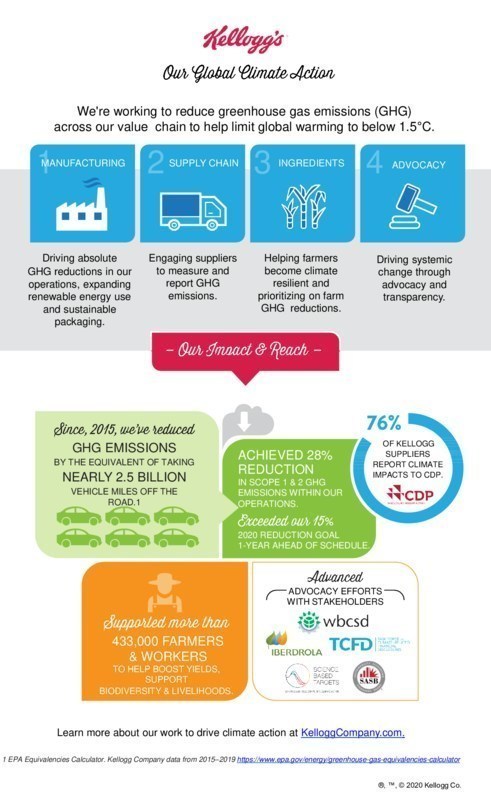 According to the United Nations, to curb the devastating effects of climate change on the global food supply, the world must halve greenhouse gas (GHG) emissions by 2030. As part of its Kellogg’s Better Days commitment, Kellogg is making tremendous progress limiting GHG emissions in its operations by using low carbon and renewable energy sources, purchasing renewable electricity and increasing energy efficiency. Since 2015, Kellogg has reduced scope 1 & 2 GHG emissions in its manufacturing plants by more than 28%, and exceeded one year ahead of schedule its goal to reduce GHG emissions by 15% per pound of food produced.

Kellogg set its first sustainability commitments in 2008, and in 2015 was one of the first companies to set Science-Based Targets to help limit the global warming to below 1.5°C.

“As a global food company, we have a responsibility to address the significant risks climate change poses on people and our planet,” said Amy Senter, Kellogg Company Chief Sustainability Officer. “We’re proud of our progress and are working on multiple fronts to reduce emissions across our supply chain.”

Investing in Renewable Energy Sources
In support of Kellogg’s commitment to achieve 100% renewable energy in its operations by 2050, nearly 28% of the electricity used in Kellogg’s food production facilities already comes from renewable resources, thereby reducing its use of fossil fuels. Kellogg is also partnering with its suppliers to reduce their emissions by 50%.

Benefits of Plant-based Foods on the Climate
With 86% of its portfolio being plant-based, Kellogg foods have a lower environmental impact than products that rely on animal proteins. In a recent report on climate change, more than 100 leading scientists stated that balanced diets featuring plant-based foods, such as those based on coarse grains, legumes, fruits and vegetables, nuts and seeds, can reduce the planet’s risk of climate change.

To learn more about the Kellogg’s climate goals, progress and advocacy for climate action, visit KelloggCompany.com or read the latest Climate Milestones report.