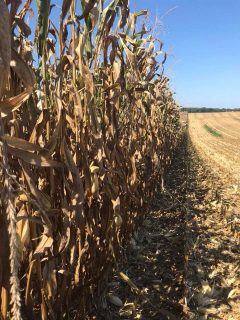 Field Crops
The majority of Michigan experienced significant rainfall and cooler temperatures, according to Marlo Johnson, Director of the Great Lakes Regional Office of the National Agricultural Statistics Service.

There were 3.2 days suitable for fieldwork in Michigan during the week ending October 4, 2020. Cold and wet weather conditions delayed fieldwork in most areas as soil moisture levels increased considerably.

Pasture and range conditions improved as a result of much needed rainfall despite a slowdown in growth due to cooler temperatures.

Corn and soybean conditions held steady as the majority of the crop approached maturity and harvest progress was slowed due to unfavorable weather. Corn silage harvest approached completion as growers continued to chop as weather allowed.

Sugarbeet harvest continued at a slowed pace although harvest was still ahead of the 5-year average. Third and fourth cuttings of Hay continued although progress was somewhat stalled. This stagnation was likely attributed to steady precipitation throughout the week. Dry bean conditions held steady as harvest continued.
Other activities included seeding winter wheat and cover crops, installing and replacing drainage tile, and preparing equipment for harvest.

Fruit
Apple harvest was in full swing last week. Most growers in Southern Michigan had more than 50 percent of their apples harvested. Rain early in the week slowed harvest on some farms. Cooler weather improved fruit color. Growers reported that labor shortages were slowing harvest. Brown marmorated stink bug damage continued to be found and numbers increased from last week. In the Southwest, Golden Delicious were harvested heavily and growers were starting on Red Delicious. On the Ridge growers harvested Gala, Honeycrisp, Empire, Jonagold and Jonathan. Growers there began to start on Golden Delicious late in the week. In the East, Jonathan and Jonagold harvest was nearly complete and growers were starting on Empire and Golden Delicious.