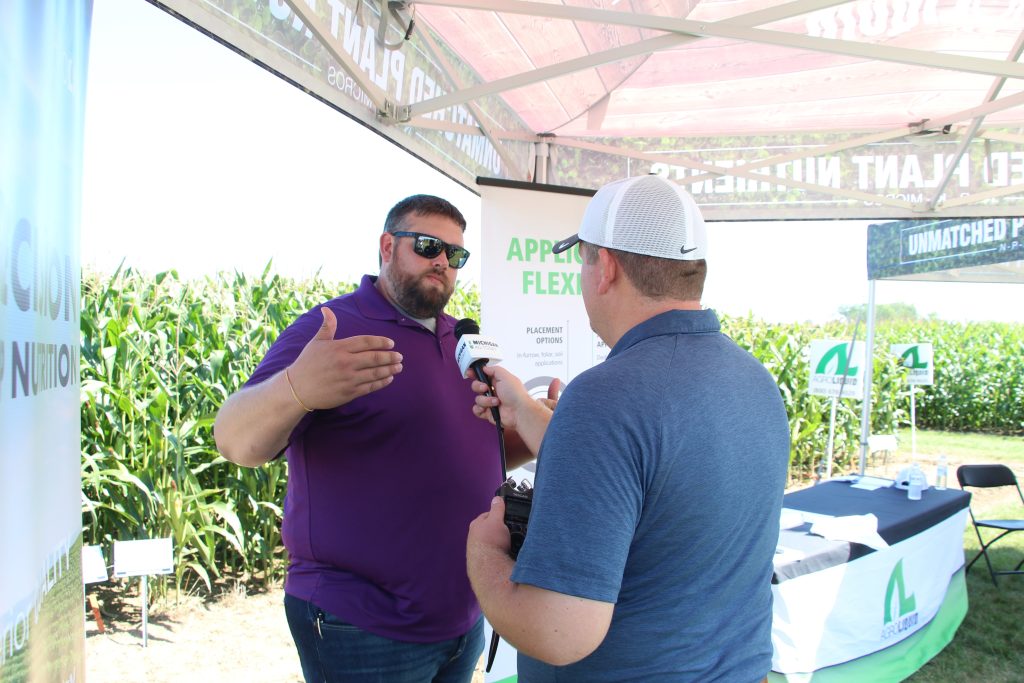 There are a lot of conversations to be had with the many exhibitors at the AgroExpo, including with the sponsor of the event, AgroLiquid.

Ryan Harbison, Sales Account Manager for AgroLiquid, discussed with Michigan Ag Today how despite weather challenges, the season has been pretty good so far.

“Rain was an issue up until pretty recently; they said that stuff was starting to look a little crispy. We had a little bit of rain. Things have really turned around, going around (the AgroExpo) yesterday and looking at all the crops, it looks that we’re going to have a really good trial data out here this year. That’s going to be good, usable data on maybe a tough growing year, which I think is valuable, because there is no normal year.”

As for the trial farms this year, Harbison says with drought concerns, AgroLiquid’s nutrient use efficiency products have helped keep crops healthier.

“We’re being very aggressive at attacking that drought this year to see if we can make that plant hang on and look at it. In the trials we have that out in, it’s very preliminary stuff right now, just looking in the field, but we’re seeing greener soybeans, stuff that’s staying alive longer. We’re seeing corn that you’re not fighting the tip back on as much. So, you’re seeing that nutrient use efficiency really shine through in those trials this year.”

Harbison says its not too late to address current crop needs. Foliar fungicide applications are still an option.

“It’s one of those, that if you are seeing an issue right now, it’s not necessarily too late to make that application. We fit very well on a foliar application and we’ve got research on our website that we’ve done in field trials that shows that we perform well there.”

“We get a little bit farther down the road, next couple weeks, everything’s kind of calmed down- let’s take a look. What issues did you see in your field this year? Reach out to somebody, let’s have that conversation. What did you do? Now, what can we do?… It is a lot of unknowns right now. We have a lot of variability in crop markets and price markets, everything like that. So, we want to be able to get in and get a plan established now, that we feel confident is going to give you the best return later in the season.”

The AgroExpo will conclude on Wednesday.