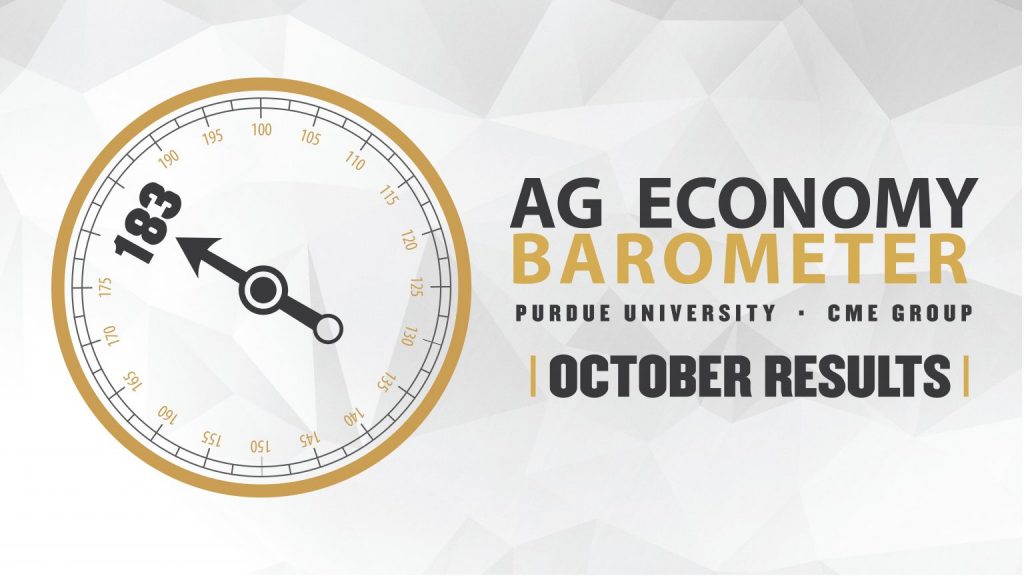 Farmer sentiment hit a new record high in October as the Purdue University-CME Group Ag Economy Barometer climbed to a reading of 183, a 27-point increase compared to September. The reading easily eclipsed the previous record high set back in February, before the pandemic’s onset. Both of the barometer’s sub-indices also set new record highs in October. Producers were more optimistic about the future as the Index of Future Expectations rose to 186, 23 points higher than in September, and especially about the current situation, as the Index of Current Conditions reached 178, 36 points higher than in September. The Ag Economy Barometer is calculated each month from 400 U.S. agricultural producers’ responses to a telephone survey. This month’s survey was conducted from October 19-23, 2020.

The late summer/fall rally in commodity prices, combined with government program payments arising from the second round of the Coronavirus Food Assistance Program (CFAP 2), appeared to be the primary drivers behind the sentiment improvement. Corn and soybean prices continued to rally despite the fact that U.S. corn yields are expected to set a new record high and soybean yields are projected by USDA to be the fourth highest on record. The combination of good yields and rallying crop prices set the stage for an additional boost in farmer sentiment. Of particular note this month was producers’ response to the question regarding their farms’ financial condition today vs. a year earlier. Twenty-five percent of survey respondents said their farm was better off financially now than at the same time last year. Although at first glance that might not sound very positive, it’s by far the most positive response farmers have provided since the inception of the barometer survey in fall 2015, and was up 11 points compared to a month earlier. The previous record high response to this question occurred in November 2019 when just 16 percent of respondents said their farm was better off financially than in the year ago period.

Unsurprisingly, given the strength in both the Current and Future Expectations Indices, the Farm Capital Investment Index also set a new record high in October with a reading of 82, nine points higher than in September. The previous record high for the investment index was 75 set back in December 2015. This month’s reading also pushed the investment index 10 points above its February 2020 reading, which was before the pandemic’s influence was felt in the U.S. agricultural sector. Responses to the follow-up question regarding farmers’ upcoming farm machinery purchasing plans were the most positive received since this question was first posed in March of this year. The percentage of producers expecting to increase their purchases of machinery in the upcoming year rose to 14 percent from 11 percent a month earlier and up from just 4 percent back in May. Perhaps more importantly, the percentage of respondents who plan to reduce their purchases in the next year was 33 percent, down from 40 percent in September, and just half what it was in May when 65 percent of respondents said they planned to reduce their purchases.

Producers became more optimistic about trade with China in October than they were in September as nearly six out of 10 respondents (59%) said they expect to see China fulfill the food and agricultural import requirements outlined in the Phase One trade agreement with the U.S. A month earlier, just 47 percent of respondents said they expected to see China meet its commitments to the U.S. When asked for their overall perspective on U.S. ag exports, the percentage of producers expecting exports to rise over the next five years increased to 65 percent in October, up from 58 percent in September and very close to expectations recorded in August when two-thirds of respondents were optimistic about export growth.

Farmer sentiment during October was the most optimistic it’s been since the Ag Economy Barometer survey began in fall 2015. The barometer reached a record high reading of 183 in October and was up 27 points from September. Farmers became more optimistic about both the future as well as the current situation on their farms. This month saw more farmers than ever before in the life of the barometer survey indicate their farms’ financial situation was better than a year earlier. Producers also became more optimistic about farmland values over the next year and nearly 40 percent of respondents said they expect higher cash rental rates for farmland in 2021 than in 2020. The Farm Capital Investment Index also reached a new record high in October with a reading of 82, up 9 points from just a month earlier. In a follow-up question, over half of respondents said they were going to hold their upcoming farm machinery purchases steady with a year earlier, compared to just less than a third who planned to do so back in April. Finally, farmers were more optimistic about trade with China, with 59 percent now expecting China to fulfill its Phase One trade agreement with the U.S., compared to 47 percent who felt that way in September.

Northey: Applying for DMC Can Mean Difference Between Staying in Business...